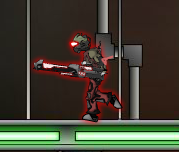 He is apparently the only leader and Boss of the Alien Armada, as there is no other apparent heirarchy among the Aliens until Raze 2.

Retrieved from "https://raze.fandom.com/wiki/Alien_Commander?oldid=7215"
Community content is available under CC-BY-SA unless otherwise noted.