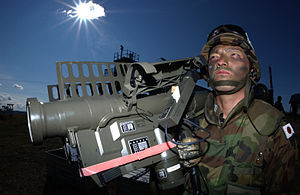 The V-12 Rocket Launcher is an Explosive from Raze 2. It has the highest direct damage of any weapon and high explosion damage, but few rounds and it is possible to kill yourself and allies with the explosive damage.

This gun appears in Raze 2. Its a high power gun, and can fire 3 rockets in high succession and with high velocity, just like its earlier version in Raze. Also like in the first game, the rocket it fires has a slight arc to it. It's description says Standard rocket launcher carries V-12 rockets that have a large blast radius and magnitude. It has a large blast radius, and kills most enemies in one hit. It has similar characteristics as the rocket launcher from the original game, but not appearance. The rocket launcher in Raze 2 still has the old one's characteristics as it fires 3 rockets in high succession and with high velocity. The reload animation is also similar. In the original title, its color is green, but the Raze 2 rocket launcher is silver, black, and red in color.

Don't fire at a close-range enemy, as you will deal damage and may possibly kill yourself. If you can hit an airborne enemy, good, but it is far more effective on grounded enemies.

Be wary of charging enemies. If they get too close, your weapon will kill the both of you. If in doubt, give them space, switch weapons, or use a Katana instead.

Be especially wary of enemies who have the Static Field or Katana abilities (denoted by the katana or static field generators on their backs).

Oddly enough, this weapon is one of the few one-shot weapons that gets the increased rate of fire from the Rapid-Fire power-up, unlike the Holy Grail, a sniper rifle of similar single shot damage. Use this as an opportunity to rain down death and destruction upon your opponents, but be wary: the storm of rockets that such use causes is highly inaccurate and will kill everything within the target area, including your allies and/or yourself. It is best to stand still or crouch when using in such a manner, as it improves your accuracy and minimizes the chance of a rocket landing at your feet.

Rockets were introduced to western warfare during the Napoleonic Wars; the Congreve rocket was a British weapon devised by Sir William Congreve in 1804 after experiencing Indian rockets at the Siege of Seringapatam (1799). Congreve rockets were launched from an iron trough about 18 inches (45 centimetres) in length, called a "chamber".These chambers could be fixed to the ground for horizontal launching, secured to a folding copper tripod for high angle fire or mounted on frames on carts or the decks of warships.

The name of the rocket used as ammunition in the game is the V-12, possibly a reference to the early German ballistic missiles of WWII known as the V-1 and V-2. V-12 would be the logical combination of these numbers.

The rocket launchers category includes shoulder-fired missile weapons, any weapon that fires a rocket-propelled projectile at a target yet is small enough to be carried by a single person and fired while held on one's shoulder. Depending on the country or region, people might use the terms "bazooka" or "RPG" as generalized terms to refer to such weapons, both of which are in fact specific types of rocket launchers. The bazooka is an American anti-tank weapon which was in service in 1942–1957, while the RPG is a Soviet anti-tank weapon.

Other forms of shoulder-launched rocket weapons include anti-tank guided missile, a guided missile primarily designed to hit and destroy heavily armored vehicles, as well as Man-portable air-defense systems (MANPADS), which provides shoulder-launched surface-to-air missiles. A smaller variation is the gyrojet, a small arms rocket launcher with ammunition slightly larger than that of a .45-caliber pistol.

Recoilless rifles are sometimes confused with rocket launchers. However, the recoilless rifle merely fires a large projectile, not a projectile that continues to propel itself after leaving the barrel of the weapon.

Community content is available under CC-BY-SA unless otherwise noted.
Advertisement