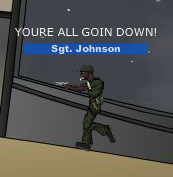 Sgt. Johnson is a Human Sergeant. He is a high-ranking raze soldier. He is the student of Cpt. Simmons and is the teacher of Cpt. Biggs.

He is first encountered in Level 7: Backup, his squad killed. Assist him killing the zombies. He is also seen in levels 8, 13, and 14, a very good ally and high-ranking in skills. He is then turned into a zombie by the boxed virus released in level 14 (like everyone else) and must be killed by the player.

As a zombie, Sgt. Johnson is one of the toughest, so you must be wary of him!

During the last few stages of the Alien Campaign, Sgt. Johnson is infected with the zombie virus created by the Aliens. The Humans, through many months, heal him by turning him into a cyborg. He only has one life but has a lot of health.

He dies between Raze 1's storyline and Raze 2's storyline. His cause of death is never revealed, but he is probably killed by the Alien Commander or an Alien. (Robot Johnson on the right.)

Sgt. Johnson was inspire by Sergeant Major Avery Junior Johnson from the Halo Trilogy series. Sergeant Major Avery Junior Johnson fought along side with Master Chief John-117 against the Covenant (an alien empire) and the Flood (a race of parasitic organism that can turn other organisms into zombie-like creatures). In the Halo Novel: The Flood, he also fights with Wallace A. Jenkins, ( a possible inspiration for Jenkins, in SFH ) but they get captured by the Flood, and Jenkins is turned into a zombie. He also says his famous words to Captain Jacob Keyes, ( who also gets turned into a zombie ). His famous words are: "Sir, I don't feel so... augh...".

Unlike the raze Sgt. Johnson, Avery Junior Johnson was immune to being turn into a zombie (by the flood).

Like the Sgt. Avery, Sgt. Johnson also possesses a "can-do" and spunky attitude, fighting even against rough odds (as seen in Level 7). His skill is comparable to that of J. Rockit 's.

Cpt. Simmons could be a reference to Red vs. Blue because in Season 12 - (ongoing) he is the rank of Capitan.

Retrieved from "https://raze.fandom.com/wiki/Sgt._Johnson?oldid=7689"
Community content is available under CC-BY-SA unless otherwise noted.